This is the place to browse and buy your wearable, readable, audible and visually enjoyable treasures. Choose something for yourself and for your friends and family.

All prices for the products are net. Postage is additional. Your treasure will be via express registered air mail post, it will be insured and your package will need to be signed for on arrival. It will take between 5 to 10 working days. For one pendant, the cost to the USA, Hong Kong and Europe is $20.00. If postage prices increase, you will be informed. Please note, for postage via courier you will need to make a special request and it will incur an extra cost. On receipt of payment, your treasure will be sent to you. Postage for Paintings will be costed individually.

All the jewellery pieces are produced in small numbers, individually hand crafted and each one is unique. Choosing a piece is a personal experience. The photographs below show the designs and the general sizes. The pendants and earrings are set in recycled sterling silver (RSS) or gold plated with 24k gold and an 18k gold flash for colour finishing. (24KGP)

Once you have chosen the design and size, in recycled sterling silver or gold plate, and we receive your order and payment. I will select from the current stock and use a pendulum to check which one is in harmony with you. If the style you want is sold out, you may place an order and I will let you know when the next collection is ready.

Selenite is for clarity of mind, expanding ones awareness of the self and ones surroundings. It facilitates connection with your highest potential in a grounded and clear way. Selenite is grounded white light and creates a protective shield when you wear it, repealing negativity in the field. It soothes the nerves, has a positive effect on the brain, enhances will power and is a good antidote to the imbalances set up by electronic equipment. Selenite strengthens bones and teeth and aligns the spinal column. It is associated with the crown and higher chakras. It is a stone for this age and vibrates to the number 8

Iolite Some pendants have a small Iolite. Iolite helps one to change ‘painlessly’, the change being towards spiritual growth, with clarity and direction. It balances the male/female aspects of one’s character, bringing harmony into relationships, eliminating debts and enhancing personal responsibility. It is a stone for this age and vibrates to the number 7.

There are three general sizes, large, medium and small. All measurements are in centimetres. The length ‘L’ is from the top of the crystal to the point and the width ‘W’ is across the widest part of the crystal.

The shape of the Selenite Pendant is threefold.
Firstly it is a symbol of an empty a vessel. A vessel is filled from the top and as it is filled, gravity draws it towards the earth as grounded white light.
Secondly, Selenite cuts through the fog of confusion, so the form is also the sword of clarity.
Finally, the form is also like a fish. Fish move like light through water, miraculous beings breathing air underwater. It is a reminder that we too come from the sea. We are the aquatic ape.
Selenite is formed from Calcium Sulphate and Water – CaSo4 +2H2O

Each piece is unique and it is best to pick the one that resonates with you. They have all been activated on healing magnetic earth, and are carved in Tampak Siring, close to the sacred water temples of Bali. They are finished by jewellers at Led Studio, artisans from across the Indonesian archipelago, using recycled sterling silver, which is also the base for the 24k gold plated pieces.

Selenite is a very powerful crystal, yet it can be fragile. Clean it by smudging it with smoke or use sound from a singing bowl. If you drop it, it will most likely break, just like us, so handle it with care, just like you would a very precious being. Love it as it loves you. It is best kept away from salt or fresh water, chemical and cosmetic products.

This is my absolute most favourite piece I got from Nicky. The first time I saw it & held it I felt a soothing calm sensation within my hands. I wear it daily as the design compliments most things I wear and I love the simplicity of it. At times in the day I hold it to calm and soothe the energies of my daily life. I sit with this crystal in my meditation too and it brings about a deep sense of peace and tranquillity helping me better deal with everyday situations and decisions.
I received so many compliments from people and also bought them for my parents who love wearing them daily. I look forward to getting the earrings soon as I know they are to be released soon“

How lucky that your crystal bring my life balance back!
For a few days I suffered from some work issues and my emotions were totally flat like a dead lake. Even though I am a Chinese medicine practitioner, I am still human and I can’t help myself while my positive qi is very low. TCM believes humans are sick because bad energy affects us from the universe, and inner emotions make us lose our balance when our body is controlled by negative energy and we also get sick! TCM also says, if our body is full of positive energy we will never get sick from bad universal qi and inner emotional imbalance!
I practiced TCM since 1992 and for the first time I felt immediately, my positive qi increased a lot when I wear your crystal! Amazing qi transfer to me from that healing stone, and now I am so peaceful and strong because I wear it every day.

The earrings are currently of one design in both recycled sterling silver and 24k gold plate. All are small in size = L 3.5 cm W 1.1 cm 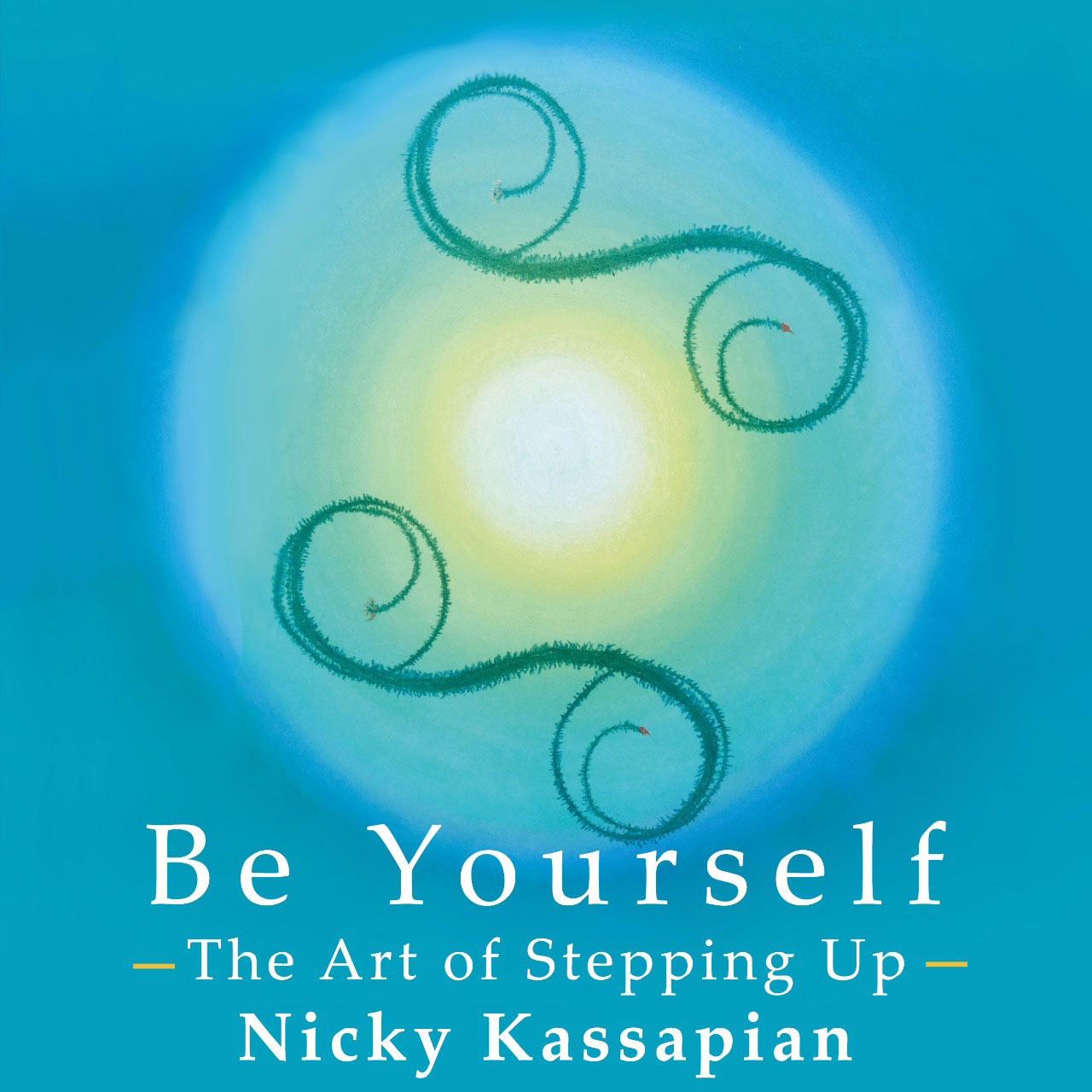 In Be Yourself-The Art of Stepping Up- Nicky Kassapian has provided a clear map for navigating your inner world. She does this through the insights gleaned as an energy worker and master of self reflection. Nicky shines the light upon all the dark places and in doing so she illuminates the options – the path of fear or the path of love. Her close attention to the unfolding spiral of life, invites you into an intimate and gentle dance with all that you are: living beauty. “

What travel destination could be more exciting to discover than that to Be Yourself?! A wonderful guide book to bring along on ones most important journey in life

These Mp3’s have been produced so that you can listen in the comfort of your own home or wherever you are. There are pauses, from 15 seconds to one minute, built into the recordings. If you need more time for a particular step, press pause on your listening device until you feel ready to go on to the next step.

Please note. The recordings are possible ways of addressing situations. The intent of the author narrator is only to offer information of a general nature to help you in your quest for emotional and spiritual well-being. The author narrator of these Mp3’s does not dispense medical advice or prescribe the use of any technique as a form of treatment for physical, emotional or medical problems without the advice of a physician, either directly or indirectly. In the event you use any of the recordings for yourself or others, which is your right, the author narrator assumes no responsibility for your actions.

Each painting is inspired by the environment I find myself in, the smells and sounds that fill the air and the sensations that I feel. There is no plan to what I do, I simply allow that which wishes to arise and be seen to move through me and arise and be seen in all its colourful glory. In that way each piece is unique and tells its own story.
Paintings are either on acid free paper or canvas and dimensions are specified. Mixed media – soft pastels on canvas, paper & wood, Oil pastels, acrylics, oils, living matter seeds and so forth.

Made with love by Tony Roseman.com

Made with love by Tony Roseman.com